Mobile sales reached a new height as record sales were observed during the holiday season of 2016. According to the lasted estimates, US consumers spent $109.3bn online in Q4 2016, which represents an 18% increase in the same period in 2015.

As per ComScore report, the cross-platform measurement firm, desktop accounted for the majority ($86.6bn) of US retail e-commerce spending during the quarter. An increase of 13% has been observed as compared to Q4 2015.

Moreover, according to the separate blog post by ComScore, desktop sales has surged as well for the majority ($80.22 bn) of US retail e-commerce spending during the November-December 2016 holiday season. One of the key findings in the ComScore report is that for the first time the mobile commerce has grown 44 percent from as compared to the previous holiday season, with $17.1 billion spent via smartphones and tablets. M-commerce accounted for a 21-percent share of the season's total digital sales, up from 17 percent in the year 2015. 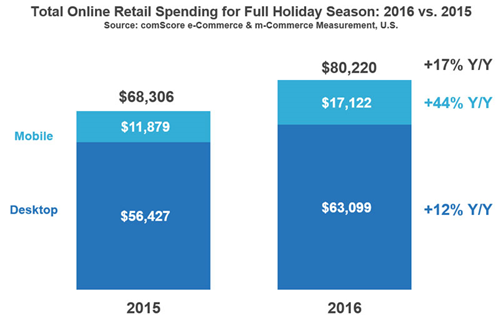 This has shown that while the mobile sales growth has seen a significant high and is quickly outpacing desktop in terms of sales increase, yet desktop sales still dominate the overall online shopping. Mobile sales accounted for 20.8% of overall web sales during the fourth quarter and 21.3% of overall web sales during the holiday shopping season. Last year during the same timeframe, mobile accounted for 16.9% and 17.4% of the overall retail e-commerce spending.

The recent statistics indicate that majority of US consumers, especially the millennial generation, are growing comfortable with the idea of online shopping via smart devices- mobile phones and tablets. The percentage of mobile commerce is expected to grow even higher in the next holiday season as well.

Reasons for high surge of sales

Smartphones have quickly gained an important role in the overall online shopping experience since the last decade, and it is often used for the search and comparison on the go. However, since past couple of years, mobile phone has really started to become a major part of checkout process- and this is what has driven the leap in the online sales thanks to mobile penetration in the e-commerce.

Many mobile retail sites have been improving their look and feel significantly over the past year; this has caused in the better shopping experience and instilling confidence in online shoppers. Besides, we are now increasingly dependent on our mobile phones for managing much of our lives so it’s only logical that purchasing the desired products on the retail sites will eventually shift to our mobile phones as well.

Moreover, over the recent years, mobile platforms have become more secure and the payment process is much smoother as well. This shows that retailers are fully embracing the potential that mobile commerce has to offer in reaching out to the customers. Given that the mobile advertising and geo-location marketing have yet to mature, you can already feel that more increase to m-commerce is likely to happen in the near future.

The need for open standards in Government data.